The Vice Admiral Rufus L. Taylor Award for Excellence in Instruction was the first award presented by the Naval Intelligence Foundation. In fact, the money donated to endow this award in October 1986 by Mrs. Rufus Taylor, occasioned the need for the Foundation. The award recognizes clearly demonstrated excellence in naval intelligence instruction and is given annually to one Navy or Marine Corps instructor, faculty, or staff at both the Center for Information Warfare Unit Hampton Roads (formerly: Navy Marine Corps Intelligence Training Center-NMITC) and the Center for Information Warfare Unit San Diego (formerly Fleet Intelligence Training Center Pacific - FITCPAC). The award consists of a commemorative wall plaque, an engraved "spy" telescope, and a 1-year membership in the Naval Intelligence Professionals.

Vice Admiral Taylor was born in 1910 in ST Louis, MO and graduated from the US Naval Academy in 1933. He began what was to be a long connection with the Naval Intelligence community as a Japanese language student stationed in Japan from 1938 to 1941. He was next assigned to the Philippines and was with the Intelligence Unit on Corregidor at the time of the surrender of the islands to the Japanese. After evacuation by motorboat and submarine to Australia, he served on the staff of the Commander, Allied Naval Forces, Southwestern Pacific until 1943. 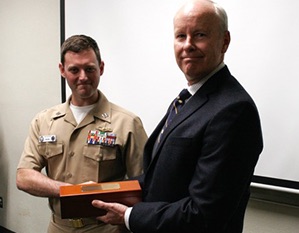