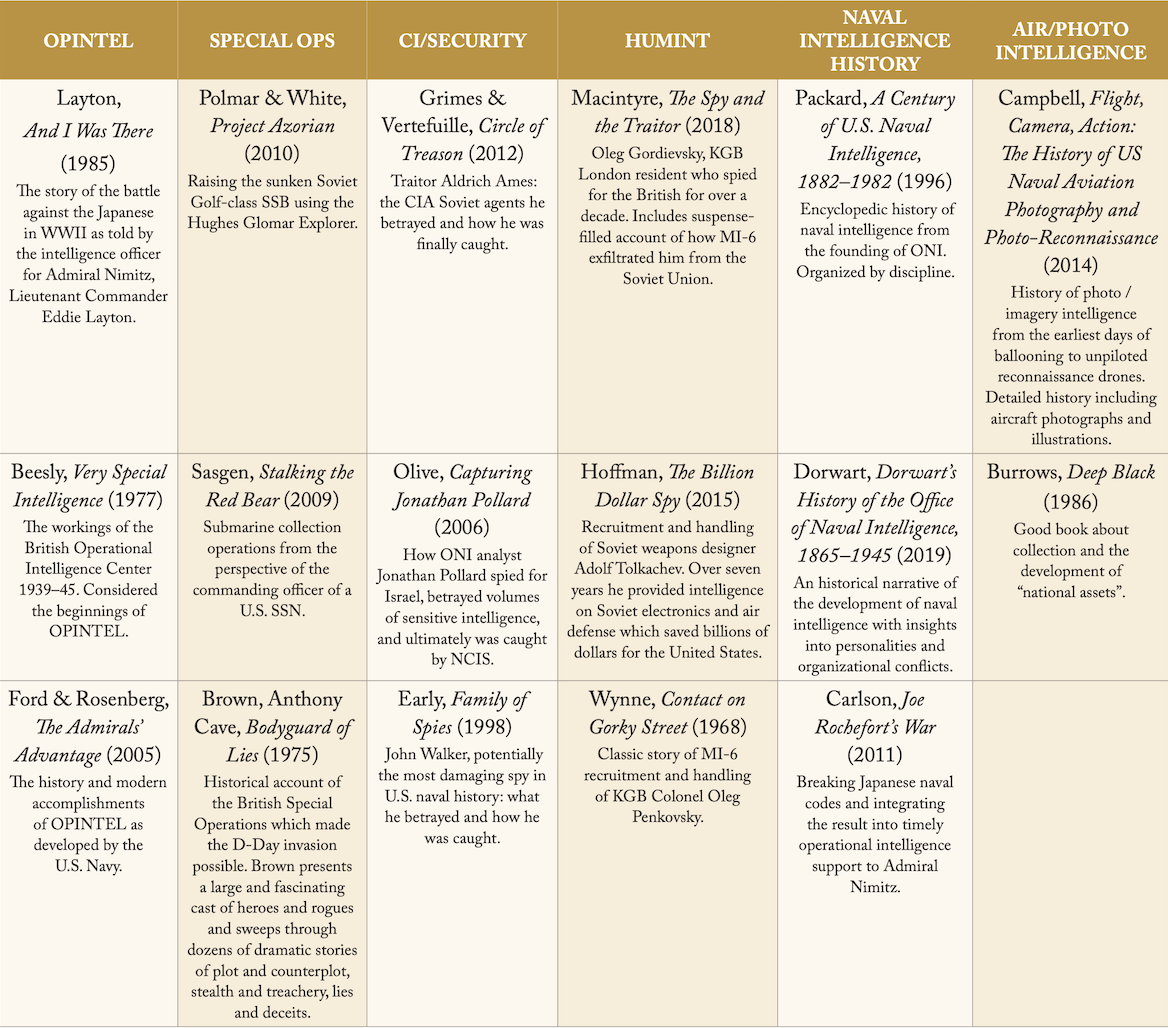 by Christopher Ford and David Rosenberg
The Admiral’s Advantage by Christopher Ford and David Rosenberg . Written by Naval Intelligence (reserve) veterans, this book is an in depth look at what US Navy “OPINTEL” is, how it developed and its critical role in the Cold War. This book focuses on the development of the OSIS system and how Naval Intelligence used deep penetration and all source analysis to help drive the creation of the 1980’s Maritime Strategy and provide global surveillance and tracking of the Soviet Navy’s strategic threat from nuclear ballistic missile submarines. An exceptionally well written book by authors who had full access to Navy sources and a practitioner’s understanding and feel for the craft of Naval Intelligence.

And I Was There

by RADM Edward T. Layton
This book is the story of the battle against the Japanese in WWII as told by the Intelligence Officer for ADM Nimitz, LCDR Eddie Layton. The 2019 Midway writers and actors used this book as background and included scenes depicted by Layton in his book.  It’s also the story of the personal and organizational battles between Naval Intelligence and Naval Communications, and as Layton notes in his first chapter, it is the story "of the enduring control for Naval Intelligence, a struggle which is still going on today.”

by Patrick Beesley
This is the story of the Battle of the Atlantic from the British perspective. It was the British who convinced Admiral King and the US Navy that OPINTEL could support convoy operations to avoid German U-boats. Beesley was the Operations Officer for the Royal Navy’s Operational Intelligence Center which worked closely with the ONI and the US Tenth Fleet in WWII. Beesley's narrative discusses the role of Bletchley Park and Communications or “Special Intelligence”, but his book is all about the importance of integrating all sources of intelligence and working closely and purposively with the Royal Navy’s operational command to provide timely, relevant and predictive intelligence. The book was mandatory reading for the students of the 1980s era OSIS OPINTEL class taught at FITCLANT and the bonus question on the final exam was “why did Patrick Beesley call the book “Very Special Intelligence?”

by Jonathan Reed Winkler
“A must read for understanding the decisiveness of the information domain in warfare….Winkler’s book is an excellent examination of how the British exploited and dominated worldwide strategic communications before and during the early years of World War One. The United States, realizing the value of that advantage and the danger it posed to its own national security, successfully worked to gain and maintain control over its communication networks through the war and its immediate aftermath. At a time when strategic communications are more global and diffused, it is essential we understand the history of how we righted the balance of control over our strategic communication networks once before and why we will need to do so again if called upon.” - Wolf Melbourne

by Jonathan D T Ward
An insightful and in depth look at the background, driving forces and details of China’s Grand Strategy to “achieve supremacy among all nations by 2049.” Dr. Ward is scholar who has lived and traveled throughout China, and by reviewing China’s leaders and communist party open writings, he puts a spotlight on the threat and dangers beyond just the military dimension.

by Sherman Kent
Published in 1966, Kent’s book is still a classic on the art and craft of intelligence analysis and the critical task of supporting decision makers. As Kent describes it, there is no phase of the intelligence business which is more important than the proper relationship between intelligence itself and the people who use its product. Oddly enough, this relationship, which one would expect to establish itself automatically, does not do this. It is established as a result of a great deal of persistent conscious effort and is likely to disappear when the effort is relaxed. Read his 16-page description of current intelligence.