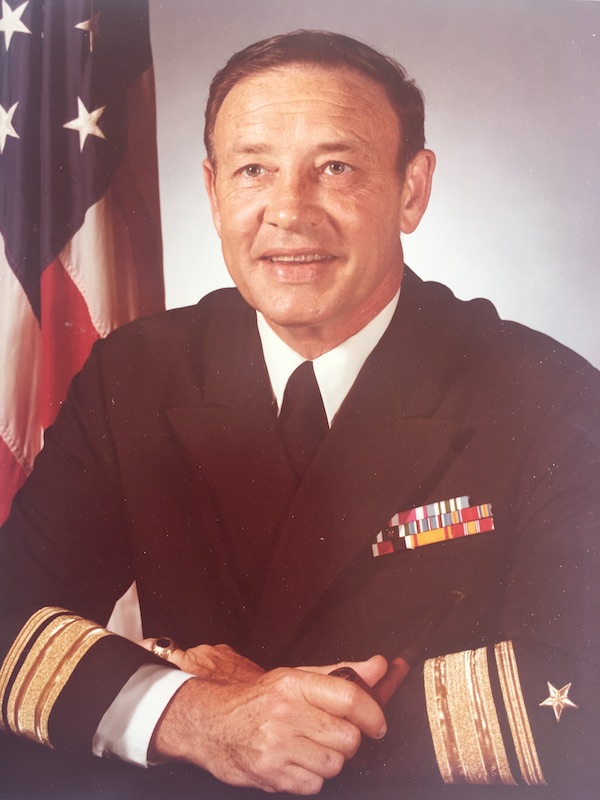 Rear Admiral (ret) Donald Phillips Harvey, the Dean of the 163X/183X community*, passed away on 25 September 2022 in Sarasota, Florida. He was 98 years old, still fully alert, and simply went to sleep and didn't wake up. To those who served with him, this was sad news indeed. He was one of the community's most respected flag officers and DNIs, serving as DNI from 1976-1978.

Don was born January 24, 1924 in Geddes SD. He accepted an appointment to the US Naval Academy in the Class of 1948, majoring in Marine Engineering, and receiving his commission in June 1947.

He served three years onboard USS Hawkins, a destroyer, before continuing his career in naval intelligence. In 1952 he met Deborah Stults in Washington D.C. and they married that December.

In 1955, Don was assigned to Seventh Fleet staff after which he served with the Office of Naval Intelligence. He then attended the Fletcher School of Law and Diplomacy from which he received masters degrees in Political Science and in Law and Diplomacy.

The rest of his career was varied and challenging, with positions on staffs in the Middle East, France, Japan, and Washington, DC. He was on the staff of the Commander Pacific Fleet in Hawaii when he was promoted to the rank of Rear Admiral and returned to Washington DC.

There he worked for the CIA and was Chief of Staff for the Defense Intelligence Agency before reaching his final position as the Director of Naval Intelligence in 1976.

Don retired from the Navy in 1978 after which he worked at TRW, leaving in 1989 to begin retirement in Sarasota FL, Debbie’s hometown.

Don was a member of the Naval Intelligence Professionals and was President and Chairman of the Board of the Association of Former Intelligence Officers.

In Sarasota, he was a member of the Navy League, the US Naval Academy Alumni Club, the Military Officer’s Association, and the Tiger Bay Club.

Survivors include his wife of 70 years, Debbie, and their children; Craig, Lynn, Reid, Anne, and their spouses. He also leaves nine very special grandchildren.

Don had an exceptional and rewarding life and will be greatly missed by his family and friends. Interment will be at Sarasota National Cemetery. A Celebration of Life will be held on October 25 at St. Boniface Episcopal Church on Siesta Key at 3:00 PM.

Rear Admiral (ret) Sam Cox, Director of Naval History at the Navy History and Heritage Command, provided this synopsis of Rear Admiral Harvey’s life and service to our Navy and nation:

Don Harvey attended Wayne (Nebraska) College and the University of Nebraska at Lincoln, and was enlisted in the U.S. Army Reserve in Lincoln, Nebraska early in WW2.  On 24 Mar 1943, he enlisted in the U.S. Naval Reserve in the V-12 Officer Training Program, studying at Doane College, Nebraska, reporting for active duty on 1 July 1943.  There he received an appointment to the U.S. Naval Academy.  He was honorably discharged on 15 June 1944 and reported the next day as a midshipman at the Naval Academy with the class of 1948 (technically, 1948-A which would be the last wartime accelerated class.)  He graduated with a Bachelor of Science in Naval Science and was commissioned an ensign on 6 July 1947.

Ensign Harvey reported to Gearing-class destroyer USS HAWKINS (DD-873) while she was deployed to the Far East, arriving in time to participate in HAWKINS’ substantial contribution to the successful rescue of all 2,000 passengers of the steamship HONG KHENG, which had run aground and caught fire near Hong Kong in July 1947.  HAWKINS returned to her homeport of San Diego in October 1947, returning again to the Far East in the fall of 1948, operating from Tsingtao, China as Communist Chinese forces closed in on the port near the end of the Chinese Civil War.  HAWKINS departed Tsingtao in December 1948, commencing a circumnavigation of the globe via Ceylon, Turkey, Gibraltar, New York City, Panama Canal, and returned to San Diego, before promptly shifting her home port to Newport, Rhode Island.

Promoted to lieutenant (junior grade) in June 1950, he reported the same month to the Naval Intelligence School at Anacostia as a student, which at the time counted as post-graduate education, and earned a sub-specialty in Intelligence.  (Exactly when he converted to a "1630" Restricted Line Naval Intelligence Officer is not clear from his record.) While there he also received Persian language instruction. Upon graduation, he reported to the Office of the Chief of Naval Operations in Washington DC in an Intelligence Officer billet. He was promoted to lieutenant in July 1953.

In December 1955, Lieutenant Harvey reported the staff of Commander U.S. SEVENTH Fleet, embarked afloat operating from Formosa and Japan while serving in a billet “in connection with operational intelligence.” Promoted to lieutenant commander in February 1958, he reported the same month to the Office of the Chief of Naval Operations (OP-0922) where he was one of three officers hand-picked by CNO Arleigh Burke to serve as CNO Intelligence Briefers (the other two officers were future four-star Bobby Inman, and future Senator from Indiana Richard Lugar, and generally reported as the beginning of what became known as CNO Intelligence Plot (CNO-IP.))

In September 1959, Lieutenant Commander Harvey was assigned as a student to the Naval Reserve Officer Training Corps unit at Tufts University, where he earned a Master of Arts degree in Political Science, specializing in Middle East studies, and a second Master of Arts degree in Law and Diplomacy, graduating in 1961.  In November 1961, LCDR Harvey reported as an Intelligence Officer on the staff of Commander Middle East Force, which at that time generally consisted of a seaplane tender and two destroyers rotating in the Persian Gulf, leasing pier space from the British at Juffair, Bahrain. He was promoted to commander in July 1962.

In May 1963, Commander Harvey reported as Operations Intelligence Officer to Headquarters, U.S. European Command, then located in Paris, France, where he was awarded a Joint Service Commendation Medal (rare at the time.)  In June 1965, CDR Harvey returned to the Office of the CNO, serving as Deputy Head, Naval Warfare Branch and Senior Navy Representative to the National Indications Center.

In June 1967, CDR Harvey was assigned to Naval Intelligence Command Headquarters as Head, Field Operations Coordination Division, where he earned a Navy Commendation Medal for providing intelligence of “immediate importance to naval forces operating in Southeast Asia.”  Promoted to captain in September 1967, he headed up the Navy damage assessment of intelligence compromised by the North Korean capture of the intelligence collection ship USS PUEBLO (AGER-2) in January 1968.

In April 1968, Captain Harvey was assigned as Assistant Chief of Staff for Intelligence (N2) for Commander U.S. Naval Forces Japan, during a period that included the continued USS PUEBLO crisis, as well as the shoot-down by North Korea of U.S. Navy EC-121M intelligence collection aircraft Deep Sea 129 over the Sea of Japan on 15 April 1969 with the loss of all 31 aboard.  In July 1970, CAPT Harvey was assigned as Officer-in-Charge of the Navy Field Operational Intelligence Office, Fort Meade, MD working closely with the National Security Agency.  He was awarded a Navy Commendation Medal for providing intelligence for “improving operational readiness of forces afloat” and “impacting directly development of new weapons systems and tactical doctrine.”  In July 1971, he reported for duty as Officer-in-Charge, Naval Intelligence Command Headquarters section, Washington DC.  Shortly after, he reported in November 1971 as Fleet Intelligence Officer for Commander-in-Chief U.S. Pacific Fleet at Pearl Harbor, Hawaii, where he provided Intelligence support to operations including Operation Pocket Money (the aerial mining of Haiphong Harbor,) and Operations Linebacker I and Linebacker II (the resumption of the bombing campaign of North Vietnam.)

Following his retirement from active duty, RADM Harvey worked as a senior representative for TRW. He devoted time to his family and was a stalwart member of the Suncoast Florida Chapter of the U.S. Naval Academy Alumni Association.

Burial services will be held on 24 October 2022 at Sarasota National Cemetery, FL and on 25 October as Celebration of Life will be held at St. Boniface Episcopal Church on Siesta Key, FL.

Although RADM Harvey retired before I became an Intelligence Officer, his influence on my career and every Intelligence Officer who followed was profound.  I recall a Chief of Naval Operations Intelligence Plot (CNO-IP) dining-in in 1986 with Senator Richard Lugar as our guest speaker, who spoke eloquently of his time serving with Don Harvey and Bobby Inman as intelligence briefers for CNO Arleigh Burke; his praise of both was effusive, and it was clear he missed the camaraderie of his time in Naval Intelligence.  Rear Admiral Harvey was an early conversion from an Unrestricted Line Intelligence Sub-specialist to a Restricted Line Intelligence Officer specialist (1630 designator at the time,) a lesson from World War II when it was lucky the Navy had officers like Eddie Layton and Joe Rochefort in key positions – something more than luck would be required to have the Intelligence the Navy needed to counter the growing long-term and existential threat posed by the Soviet Union.  Without need to rotate to regular shipboard assignments to remain competitive for promotion, Don Harvey was able to remain continuously in Intelligence billets, developing the deep expertise in adversary capability and intent; this would serve him, and the U.S. Navy, exceptionally well as he rose to critical Intelligence Officer billets, providing timely, operationally-focused intelligence to fleet commanders.  He held key billets contributing to the development of the Navy’s Ocean Surveillance Information System (OSIS) and Fleet Intelligence Centers (FIC) that were the mainstay of Intelligence support to operational commanders in the Cold War, as well as the Vietnam War and numerous other crises.  During his career, he and his family moved some 28 times; he served in jobs that went 24/7/365 at sea and even ashore, all of which required extraordinary dedication and sacrifice of his family time, in order to ensure that the Soviets could never do what the Japanese did at Pearl Harbor.  The sacrifice mattered, and Don Harvey contributed to bringing about the end of the Cold War in ways that cannot be described at this classification.  He was respected by superiors and subordinates alike for his drive and ability to get things done, yet was also described by many as the nicest person you would ever want to meet.  He was a true gentleman and one of the finest Naval Intelligence Officers this country has produced; his impact was profound and lasting, for which the Navy and the Naval Intelligence Community is truly grateful.