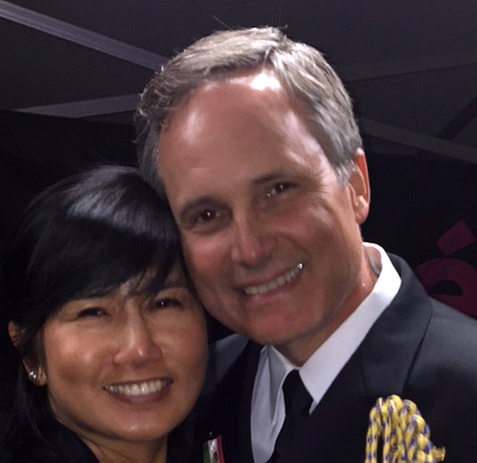 Following a long battle with pancreatitis, CAPT (ret) Stewart “Stew” Holbrook departed these shores on September 8th, 2022 at the age of 59. He began his career in Naval Intelligence in 1987 when his father’s favorite joke became that the Navy sent him off to become intelligent AFTER they had paid for 4 years of undergraduate studies at Bradley University. Stew served as U.S. Naval Attaché to Australia, intelligence officer for the USS Theodore Roosevelt (CVN-71), was a survivor of the September 11th attack on the Pentagon, and held numerous other operational and staff assignments. Following retirement from the Navy, he continued in government service at DPAA, aiding in our country's promise that no soldier, airman, marine or sailor will be left behind.

In his personal life, Stew was an avid golfer and amateur photographer. His wife was his favorite golf partner and subject to capture. He loved playing the tour guide to visiting family and friends and immensely preferred this activity in warm climates as compared with the chilly winters of his youth. Stew and his wife were finishing out his working years in Hawaii when the Covid-19 pandemic began and he joked with her that it was certainly not a bad place to be trapped. He tragically became ill months short of his planned retirement and passed away long before his family was ready to let him go. CAPT Holbrook is survived by his wife, Jum Holbrook; son, Warren Manegan; daughter and son-in-law, Sarah and Chris Heeney; and brother, Mark Holbrook.

To honor Stew's life, the family recommends donations to the Tripler Army Fisher House (or another Fisher House near you), to be an active advocate for your or a family members’ health care needs, and to not wait too long to start your golden years. He is to be interred at the National Memorial Cemetery of the Pacific (aka "Punchbowl") in Honolulu, HI where he can enjoy the warm weather in perpetuity.