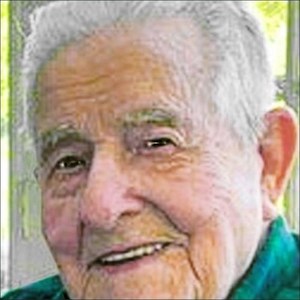 Commander Edward R. Ettner, of Lorton, Virginia, died peacefully at home, surrounded by 10 of his children on January 26, 2022. A World War II veteran and retired submariner who commanded a diesel submarine and a Submarine Division, Ed served a dozen DNIs as senior analyst for a compartmented, submarine-related program from 1967 to 1999 and then as a consultant to the DNI until 2005. Anyone involved in this program knew and respected Ed Ettner as a consummate subject matter expert and true gentleman.

Edward, one of the few remaining members of our country's "Greatest Generation", was 100 years old at the time of death. He was born in Manitowoc, WI, where he lived with his parents, Frank and Margaretha (Haettler) Ettner. He attended Manitowoc Lincoln High School, graduating in 1938. On 19 January 1946 he married the love of his life, Mary Jane "Janie" Houghton in Yorktown, Virginia. Ed traveled throughout the United States and overseas. His principle residences were Oahu, Hawaii, Coronado, CA, Charleston, SC, Norfolk, VA and Lorton/Mason Neck, VA. Ed was predeceased by his beloved wife of 53 years, Mary Jane, who died on May 24, 1999. He remained dedicated and faithful to the love of his life. He was also predeceased by his oldest son, Edward Rudolph Ettner, Jr., LTC, USA, (Retired) on April 11, 2012. Ed is survived by his children, Barbara Jane, of Kilmarnock, VA, Ellie Janice, of Santa Ana, CA, Elizabeth "Libby" Janeen, of Norwich, CT, Mary Lucille, his dedicated and devoted caretaker, of Lorton, VA, Margaret Marie, of Woodbridge, VA, Frederick Charles of Leonardtown, MD, Franz Josef "Joey", of Groveton, GA, Wilhelm Johann of Lorton, VA, Andrew James of Front Royal, VA, and Gracie Jo of Marshall, VA. He is survived by 24 grandchildren and numerous great-grandchildren.

Ed was a true patriot. In 1945, he picked up the gauntlet and served his country in uniform, enlisting in the United States Navy. He retired from the U.S. Navy in 1969. Highlights of his military duty stations and service include F/C division officer aboard the USS Saugus as head of the gunnery department and minesweeper as XO/CO before joining the Submarine Force in 1947. Ed fleeted up from XO to CO of the USS Bugara as lieutenant in 1956. In 1957, he successfully conducted the first "Hunt-to-Exhaustion" exercise to test Western Sea Frontier's ASW capabilities against a diesel submarine. He also served aboard the USS Scabbardfish the Perch, the Razorback, the Cabezon, the Caimen and the Seafox. In 1959, he attended the Armed Forces Staff College, in Norfolk, Viriginia. He commissioned the Polaris Weapons Facility, in Charleston, South Carolina in 1960 as head of the weapons department with responsibilities for ten divisions. He received the Naval Commendation Medal for heroism in 1961 for risking his life to save two drowning people from certain death. From 1962 to 1965, Ed was assigned to COMSUBLANT staff as the technical advisor for Polaris Matters. He also planned the A1/A2 Operational Readiness and Reliability testing and Patrol Weapons System readiness testing for the USS George Washington and Ethan Allen class SSBNs. In 1965, Ed assumed command of COMSUBDIV-63 and in 1966 was assigned to SACLANT as Submarine Nuclear Weapons planning officer. He completed his Navy career in Washington on the DNI's Staff as deputy assistant for USW Intelligence from 1967 to 1969, when he retired from active military service.

Ed joined a special intelligence activity in 1969 as a senior intelligence analyst for a special program within the Department of Naval Intelligence. He retired in 1999. He continued to work as a consultant for DNI until 2005.

Ed was a deeply religious man, devoted to God, his Catholic faith, and his family. A man of deep generosity and charitable giving, he supported numerous organizations within the Catholic Church, especially Catholic colleges, seminaries and convents. He was a lifetime member of the Knights of Columbus. Ed also volunteered at Our Lady of Angels as a catechist, teaching CCD, and Sacramental preparation. His prayer life was rich and sustaining as he faced the myriad tests and struggles of a centenarian. The Rosary was his most precious prayer due to his deep devotion to Our Blessed Mother.

He was a voracious reader, and pursuer of knowledge. His library of books attests to his abiding pursuit of knowledge and truth. He was heard to say, "a room without books is a room without a soul". His social skills with others always brought out the best in them. He had the innate ability to "read" people and welcome their thoughts and ideas. He preferred to stay in the background, watching and listening rather than take his deserved place of honor in any setting. So many people have offered condolences that recognize his greatness and humility, his leadership and companionship, his guidance and sound advice. His most favorite place was to be with his family at the many occasions of gathering. He will be greatly missed by family and friends. Requieascat in Pace, dear dad.

On Sunday, January 30, 2022, the family will receive friends from 2 to 4 p.m. and 6 to 8 p.m. at Mountcastle Turch Funeral Home, Dale City, Virginia. A Requiem Mass will be offered at Our Lady of Angels Church on Monday, January 31, 2022 at 10:30 a.m. Ed will be interred at Calvary Cemetery, Manitowoc, Wisconsin with a graveside service. In lieu of flowers memorial donations can be made to the St. Vincent DePaul OLA Conference, 13744 Mary's Way, Woodbridge, VA 22191.