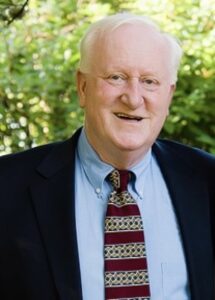 Charles William “Bill” Altenhof, 78, died Friday, 25 March 2022 at UMass Medical Center in Worcester, Massachusetts. He was a former Naval Intelligence officer and civilian at NSA before becoming a lawyer in Massachusetts.

He was son of the late Raymond and Dorothy (Bunce) Altenhof and beloved husband of Mary (McGrath) Altenhof.

Bill was born and raised in Lansing, Michigan, graduating from Lansing Eastern High School in 1961. He attended and graduated from Michigan State University with both a BA (1965) and MA (1967) in Political Science.

Following his graduation from Michigan State, Bill joined the U.S. Navy and attended Officer Candidate School in Newport, RI.  He was commissioned as an Ensign in 1967 and assigned his first orders:  US Naval Intelligence, CINCPACFLT, Pearl Harbor, HI.  As a Naval Intelligence Officer Bill was promoted to Lieutenant JG before being honorably discharged in 1969 during the Vietnam era troop draw downs.  Building on his intelligence experience, Bill moved to Laurel, MD and proudly served his country again as a civilian intelligence analyst with the National Security Agency.

In 1971 Bill relocated to the Boston area to attend the New England School of Law where he completed his J.D. in 1974.  Bill opened his private legal practice in Sudbury, which he ran for more than 20 years.

Bill was a natural teacher and gained tremendous joy from interacting with children and “watching their wheels turn” as they worked to solve the impromptu trivia or problem-solving challenges he would create.  Bill was also passionate about genealogy and dedicated his time over 40 years to trace the lineage of the Altenhof family and that of all others joined in marriage.  Bill was an explorer and found great pleasure in going places that he’d never been, and seeing things that he may never see again with his wife Mary and children Keith and Amelia.  Bill would frequently share memories of he and Mary’s 2004 R.V. trip to Alaska and back and spoke of this as the “trip of a lifetime”.  Bill’s curiosity for the natural world was not limited to Earth as he spent considerable time reading about our Universe, especially the mystery of gravity and would be happy to bend your ear on the topic if you found yourself in his company.