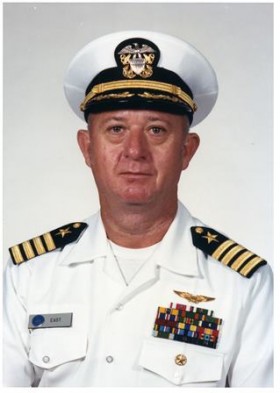 Born in Clay County and a 1957 graduate of Bibb Graves High School, Don immediately enlisted in the U.S. Navy. Demonstrating his great potential, he rose to the grade of Chief Petty Officer. During his enlisted service, he served as a specialist in electronic warfare and as a cryptologic technician, as well as attaining proficiency in Russian and other European languages.

During the Vietnam War, Capt. East received a commission as an Ensign and was assigned to flight training, eventually receiving his wings as a naval flight officer and over the rest of his distinguished career amassed nearly 10,000 flight hours.

During the remainder of his naval career, he served tours of duty involved in electronic and photographic reconnaissance and in naval intelligence as a specialist in Russia and Communist Bloc countries. His tours of duty included numerous overseas assignments, as well as the National Security Agency, Naval Technical Intelligence Center and U.S. Navy and U.S. Air Force War Colleges, where he was assigned as a professor of naval science.

In addition, Capt. East earned master’s degrees in national security studies from the Naval Postgraduate School and in international relations from Salve Regina College in Newport, R.I. Following his retirement from active duty in 1992, he returned to his native Alabama, where he was the owner and operator of The Creeks Tree Farms.

While in retirement, he wrote a masterful history of VQ-1 for the Tailhook Association's flagship publication The Hook to demonstrate the criticality of airborne SIGINT collection. The article is a must read.

Capt. East is survived by his wife, Cynthia; a daughter and son, a stepson and six grandchildren. He was preceded in death by his parents, Daniel Albert East and Gladys Cleveland East.