TOPIC: The Continuing Evolution of Naval Intelligence -- Some Personal Perspectives from a Lifetime in the Profession 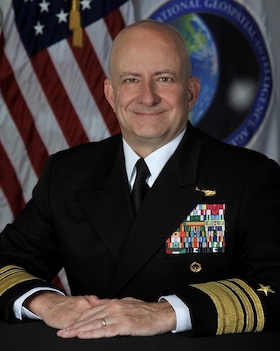 Admiral Robert Sharp, USN (ret) served as a Naval Intelligence Officer for 34 years, and as a leader within the Information Warfare Community since its inception.

His last tour of duty was as the seventh Director of the National Geospatial-Intelligence Agency (NGA) -- an organization of approximately 14,500 civilian, military and contractor employees working across more than 100 locations in the U.S. and 20 international locations delivering world-class geospatial intelligence that provides a decisive advantage to policy makers, military service members, intelligence professionals and first responders.

From April 2016 to February 2019, VADM Sharp served as Commander, Office of Naval Intelligence and Director, National Maritime Intelligence-Integration Office. During his initial flag assignment he served as the Director for Intelligence (J2), U.S. Special Operations Command.

A native of San Jose, California, VADM Sharp graduated from the University of the Pacific with a Bachelor of Arts in English and was commissioned through Officer Candidate School in 1988. He holds a Naval War College diploma and earned a Master of Science in National Resource Strategy from the Industrial College of the Armed Forces in 2008.